Biography
Ivan Englund (1915-2007) was born in Liverpool, NSW. He completed a Diploma of Painting and Drawing at East Sydney Technical College in 1951, then taught art and ceramics in institutions in Victoria, Canberra and Wollongong, where he took up a post at the Technical College in 1954. He was one of the original four members of the Potters� Society of Australia when it was formed in 1956. He conducted extensive research into glazes and published two books and many articles on this work. In 1962, he was awarded an ESTC Fellowship for his development of igneous rock glazes. In 1971, he was appointed Senior Head Teacher of Art at ESTC, and from 1972 to 1977, he conducted the Ivan Englund Pottery School at the Rocks, before moving to Walcha, NSW, and then to Bawley Point, NSW, to work as a full-time potter. For his work on middle-fire glazes he received a Doctorate from Wollongong University in 1995. He has entries in the 1974-1996 potters' directories. His works are marked with an impressed or incised 'IE' or his full name, incised.

Works by this artist 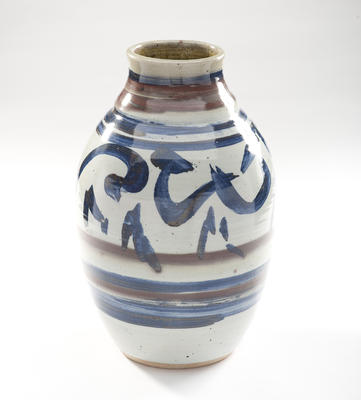